I have done many mosaic robots in the last couple of years and most of them are male. There is something about robots that just scream 13 year old boy to me and so many of my bots are fellows. I have created a few females and they usually have some sort of eyes lashes or sprockets that could be lashes. The other day when I was looking up famous bots I discovered a female Robot named Helen O’Loy. This little doodle is named after her. 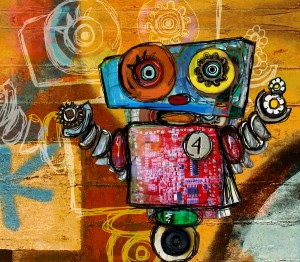 Two young men, a mechanic, Dave, and a medical student, Phil, collaborate on modifying a household robot, originally meant only to cook food and clean, in order to allow it to have emotions. They are more successful than they intended, and the robot, named “Helen O’Loy” falls in love with Dave, the mechanic. Dave initially avoids her, rejecting her advances; but, later marries her; and, she moves in, with him, to the fruit farm, he inherited. Over the years, her features are artificially aged, to match those of her human husband, with the help of Phil. When Dave inevitably dies, she sends a letter to Phil requesting that he dissolve her metallic structure, with acid, and bury her with her husband. She also asks that he doesn’t let anyone discover their secret. In the final line, it is revealed that Phil, who had been narrating the story, had secretly been in love with her all along, as well. ( From Wikipedia).